IRISH COUNTRY MUSIC GOLDEN BOY, DEREK IS SET TO RELEASE MAGNIFICENT SEVENTH AND EIGHTH ALBUMS…’THIS IS ME’ AND ‘HAPPY MAN’ ON THE SAME DAY

Derek Ryan, the man with the musical Midas Touch for creating 24 carat gold country cuts, is back with not one, but TWO fantastic new albums.

Taking his cue from superstar acts like Bruce Springsteen, Prince and Guns N’ Roses who delighted their fans with simultaneous separate album releases, multi-award winning Derek is scoring a ‘first’ on the Irish country music scene.

The multi-talented singer-songwriter follows up the consecutive Number One successes of his albums, The Simple Things and One Good Night with the brand new sets, This Is Me and Happy Man(out October 21).

Constantly striving to challenge himself, 2016 saw determined Derek fitting in recording sessions in the USA, Ireland and England alongside his hectic, ever popular live show schedule.

The remarkable results from that blitz of artistic activity are the aptly titled This Is Me – recorded in Nashville with Don Henley and Dolly Parton studio wizard, Jeff Balding – and Happy Man – made with longtime producing collaborators, Jonathan Owens and Kai McKenzie.

Delighted with the results of both projects, trailblazing Derek decided not to delay the release of either This Is Me or Happy Man. Instead he opted to release both sets of songs on the same day!

“I am 99.9% sure that releasing two new albums at the same time must be a ‘first’ in Irish country music. I am the kind of person who wants to push and challenge myself and try different things. That is the way I am always going to be”, laughed Derek.

And the Garryhill, County Carlow hit maker has scored yet another ‘first’ with This Is Me. For the 11-track album showcasing a dazzling new country pop rock versatility to his talents is the debut release on his own new Ryan Records label.

Derek said that he had relished the chance to work with Nashville royalty and labelled This Is Me as “the album I always wanted to make”,

“This Nashville album gives me the opportunity to show people what I can do, apart from the Irish country music genre. It is something I always wanted to do. So I hope that people give it a chance and see how we have tried to progress and take things further”, he said.

Here’s Derek’s reflections on a selection of choice cuts from This Is Me:

*This Is Me(co-written with A Woman’s Heart hit maker, Eleanor McEvoy): “I have been gigging since I was 13 and in the music business professionally since I was 18. At the age of 33, I feel comfortable with what I am doing professionally and in my personal life now. Eleanor said ‘let’s write about you growing up and how you feel now’. So that’s what we did.”

*Tender: “I had always wanted to record a song with a live feel with that big rock and roll kind of drive – almost like a stadium opener. It definitely has a Bryan Adams influence. It is one of those driving tunes to roll the windows down to. It rocks out and it turned out exactly the way I wanted it. It is definitely one for a new single.”

*God’s Plan(2016): “This was my debut single in 2009. I wrote it when I was living in London. My career is where it is because of that song. I wanted to do a new version of it in Nashville. But I did it in a very, very raw bluegrass style this time. Now there are talks of God’s Plan being released as a single in the US.”

*Some Days: “It was a hot summer’s day and I was having a writing session at home with a friend of mine, Gerry Carney. An ice cream van was outside and the kids were going crazy. I remarked that ‘some days, do you wish you could go back to when you were excited about ice cream and had no stress in your life whatsoever?’. Then the song took a country twist with heartbreak. So it gets a bit deeper than ice cream!

Work on This Is Me was completed at the end of March. But shortly afterwards, Derek admitted that his “constant creative buzz” inspired him to head back into the studio to record a whole new batch of more traditional style Irish country songs.

Hooking up with regular collaborators, Jonathan Owens in Granard, County Longford and Kai McKenzie in Ashford, Kent, a second new album, Happy Man is the result.

“I probably started the first track back in March and we finished Happy Man in mid-September. It all went for mastering just a few weeks ago. So, it was tight!”, laughed Derek.

Here are his thoughts on a selection of songs from the 14-track Happy Man set:

*City Of Chicago: “This is a Christy Moore song, written by his brother, Luka Bloom. It came on when I was listening to Christy songs on YouTube one day as I was tidying up the house. I listened to the lyrics over and over again and I thought how even though it is a sad song, there is something uplifting about it too. It struck me how haunting it was. It works as a jive as well and the reaction to it already has been absolutely brilliant.”

*Sax, Drums & Rock ‘N’ Roll: “This was one of the last songs to go on the album. I am sure that if some people listen to it quickly who haven’t looked at the track listing, might mistakenly think ‘he is singing about sex’! But we tried as much as possible to pronounce it ‘s-a-x’. It is uptempo and catchy and a bit of fun.”

*Sixty Years Ago: “It was sent to me by a writer called Seamus Doran. When I heard it, I knew that it was a beautiful song and that it had a Johnny McEvoy folk feel to it. That is a style which I feel is one of my strongest areas. I think it is a very, very special song and is going to touch a lot of hearts. It is also going to be a single.”

*Carry Me Home(co-written with Marc Roberts): “I remembered an old guy sitting beside me on the London underground. He was elbowing me every so often. He was lifting his arm to drink a naggin of whiskey out of his jacket pocket and then he started singing Irish songs. We imagined how that man got to be where he was and we came up with a traditional Irish country waltz. I think it is a touching song.”

Derek will be popping up on a variety of radio and TV shows and making a number of in-store appearances to promote This Is Me and Happy Man. He will also be keeping fans of his electrifying live shows happy too with regular dancehall gigs and UK and Ireland theatre tour dates in late 2016 and the first half of 2017.

But the modest man with the terrific talent doesn’t take his success or his fans for granted. For his future plan is to keep pleasing everyone who has supported his music and live shows to make him one of the brightest stars on the Irish country music scene.

Said Derek: “You know what I always say when I get asked what my ambitions are? I just say it is ‘to keep working’. We are very lucky with the position we are in at the moment. The shows are going great and so many people are coming out to see us.

“Now it is a case of keeping at the top of my game, keep working hard and to keep trying new things to show what I can do – with all aspects of my creativity.” 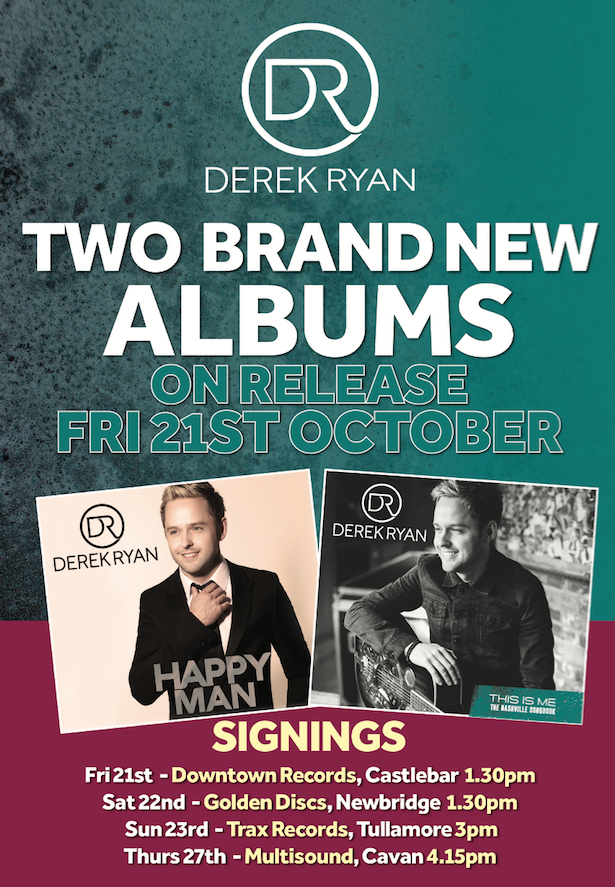 Check out Derek’s official website, www.derekryanmusic.com for all the latest news on forthcoming in-store, media appearances and live shows.