DEREK’S AWARD WINNING CONCERT TOUR GOES BACK ON THE ROAD

This year the praised concert tour from Derek Ryan and his band will be stopping off at several locations throughout the North and South of Ireland for what is to be his best concert tour yet! People are expected to come from near and far to catch a glimpse of the ‘Entertainer Of The Year’ on his Irish Tour, which has been selling fast since going on release in November.

Singer/ songwriter, Derek Ryan had released his most recent album, ‘One Good Night’, last year, which topped the charts on the week of its release. 2015 was a whirlwind of success for Derek, and he plans to make this year even better, starting it off by crossing the Atlantic to begin recording his forthcoming album in Nashville. The Carlow man will be retuning next week, just in time to kick off his 2016 Irish Tour.

“I love what I do”, said the ex D-side member, “It is tiring don’t get me wrong, I couldn’t do it without my fans. I know everyone always says that, but it’s true, not only do they buy the records – they keep me going! That’s why I love meeting my fans coming off stage, it’s like I’m putting faces to names I see coming up on my twitter and facebook all the time!”

The award winning concert tour includes a mix of old favourites, classic country and Derek’s own original material, so join the heart throb and his band for a show-stopping night in one of the various locations throughout NI. 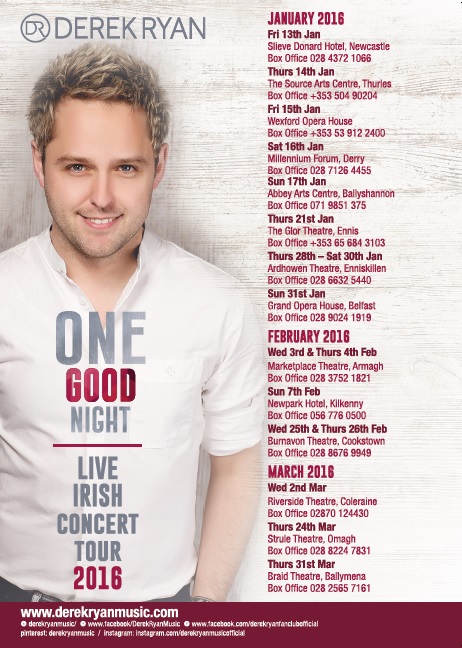