DEREK IS ‘DELIGHTED’ WITH A DOUBLE WIN!

Derek has done it again, taking home not one, but two awards at last night’s awards ceremony. Country stars from up and down the country glammed up last night to attend the Annual Hot Country Awards Ceremony in the Mullingar Park Hotel.

Derek was honoured to be in attendance at the awards, and was thrilled to be awarded with ‘Entertainer of the Year’ for the third year running and ‘Album of the Year’ for his number one album ‘The Simple Things’, which was released last year. Derek has been honoured with the same titles earlier this year, at the ‘Sunday World’ Awards.

The overwhelmed star tweeted his fans last night after the show, “Delighted to win ‘entertainer of the year’ and ‘album of the year’ at the hot country awards tonight in Mullingar! Great night. Well done Hugh O’ Brien and crew!” 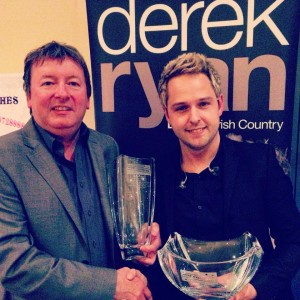 The award-winning performer has just returned home from the first leg of his UK Tour and will be returning next week to finish off his 19-date concert and dance tour. He & the band are just home in time for the bank holiday weekend, where Derek will be performing at not one, but two festivals! The country icon will be appearing at Burren Festival, Co. Down on Friday 1st, Jamboree in the Park Festival, Fintona on Saturday 2nd and finishing up the weekend with a dance in the Termoneeny Centre, Lavey on Sunday!