The praised concert tour from Derek Ryan and his band is going back on the road, for what is to be his best concert tour yet! People are expected to come from near and far to catch a glimpse of the ‘Entertainer Of The Year’ on his Irish Tour, which has recently been announced.

Singer/ songwriter, Derek Ryan released his most recent album, ‘One Good Night’, last year, which topped the charts on the week of its release. 2015 was a whirlwind of success for Derek, and he plans to make this year even better, after recording his forthcoming album in Nashville, back in January.

“I love what I do”, said the ex D-side member, “It is tiring don’t get me wrong, I couldn’t do it without my fans. I know everyone always says that, but it’s true, not only do they buy the records – they keep me going! That’s why I love meeting my fans coming off stage, it’s like I’m putting faces to names I see coming up on my twitter and facebook all the time!”

The award winning concert tour includes a mix of old favourites, classic country and Derek’s own original material. The highlight of the show is usually considered the moment the huge band and performance is striped back, where Derek is left alone with his guitar on stage. This, to Derek, is a chance for his audience to get to know him better, and know more about the music, rather than the performance.

Derek’s 2017 concert tour will be kicking off with a debut performance at the Ulster Hall, Belfast on Friday 13th January, before moving to several other theatres throughout NI. Please see www.derekryanmusic.com for further information. Tickets are on sale now for this fantastic tour and are expected to sell out fast! 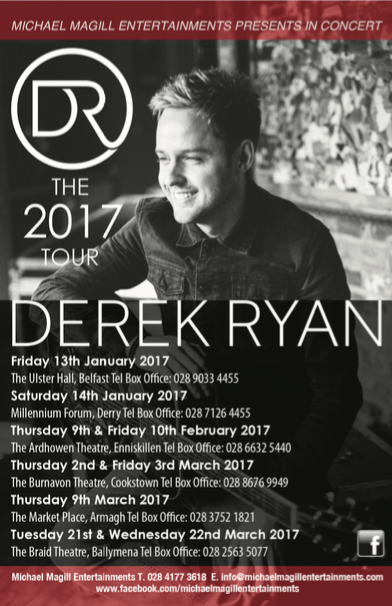